Showing posts from July, 2013
Show all

Cats and the Weather 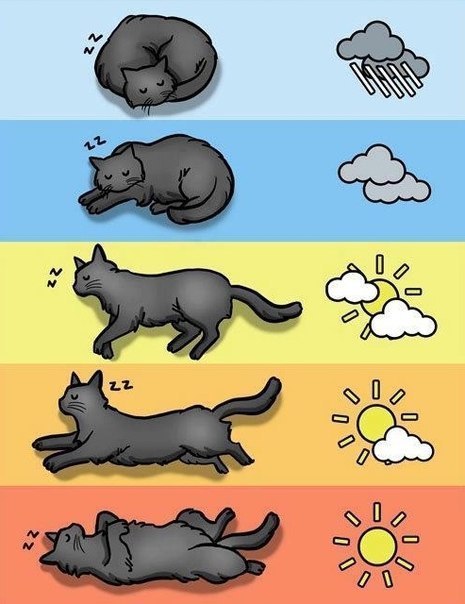 Made me laugh :) linking up with Wordless Wednesday
7 comments
Read more 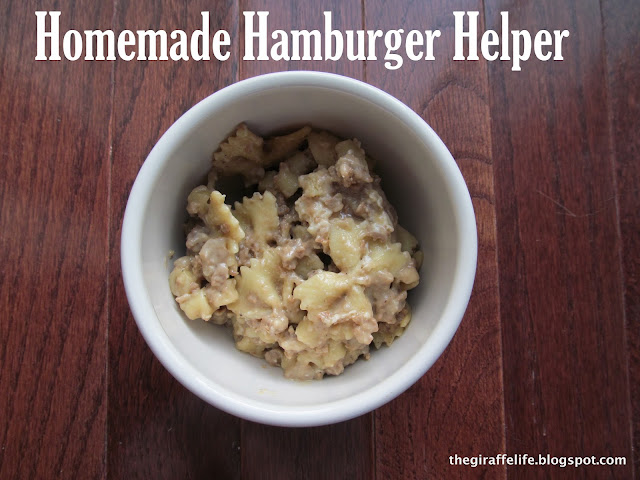 When I first moved out on my own, I had plenty of cooking experience with rice, pasta, vegetables, and cookies. But cooking meat? The best I could do was microwave sausage links or heat up chicken nuggets in my toaster oven. I've never liked the look or feel of raw meat (especially anything with a bone or a shell, because it reminded me that whatever I was holding used to be alive). So I just avoided it.  The one exception? I'd buy ground beef and use it to make Hamburger Helper. My favorites were the regular Cheeseburger Macaroni and Crunchy Taco. Of course, when I started paying more attention to the foods I was eating, Hamburger Helper hit the chopping block. But I missed the ease and comfort-food-ness of the cheesy dish. So I jumped on   this recipe  over at Iowa Girl Eats and modified it a bit to be vegetarian.  Homemade Vegetarian Hamburger Helper • 1 pound ground beef, soy crumbles, or chopped vegetables (or a combo) • 1 tablespoon cornstarch • 1 teaspoon o
12 comments
Read more 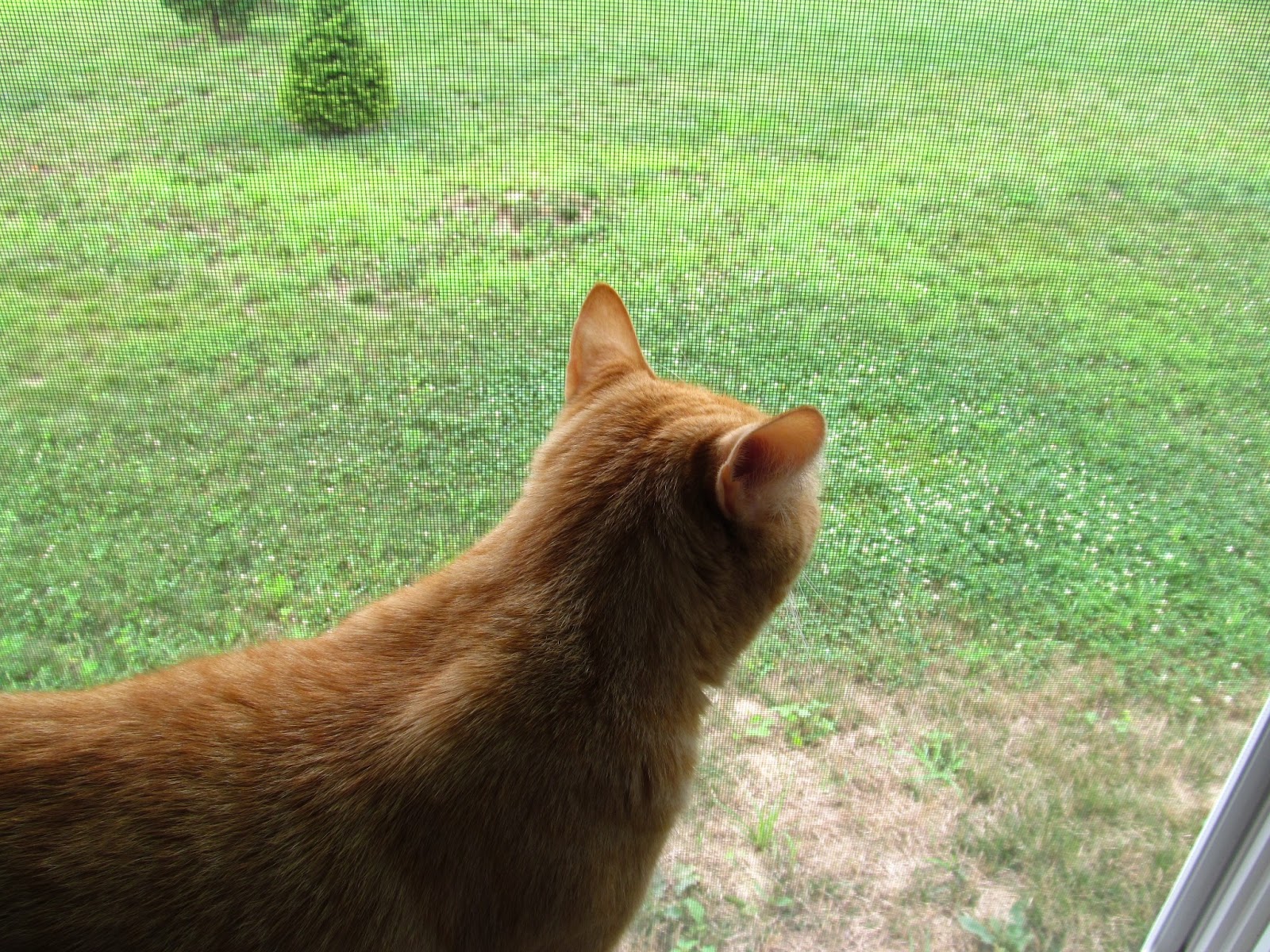 THE WEATHER! After a month of 90º+ temperatures, we finally turned off the AC Wednesday night, opened all the windows, and let the wind rush in. There are few things in life that make me happier than a breeze. I'm that weird person who steps outside in the morning, excited to find out how the air smells that day, and it's even better with the windows open - then I can tell from bed. :) Of course, the cats are just as thrilled by the open windows and breeze. Thursday's high was only 74º and today's expected to be 79º. It's completely crazy for late July, which makes me double grateful. It's perfect! The hibiscus: We planted this three years ago when a bunch of our flower bed plants died at once. I love it! The flowers are huge and they attract hummingbirds, one of my favorites. It's hard to believe that when we first planted this, it barely grew to a foot tall! It dies back completely each fall, and watching it grow from nothing into a four-foot tall
2 comments
Read more 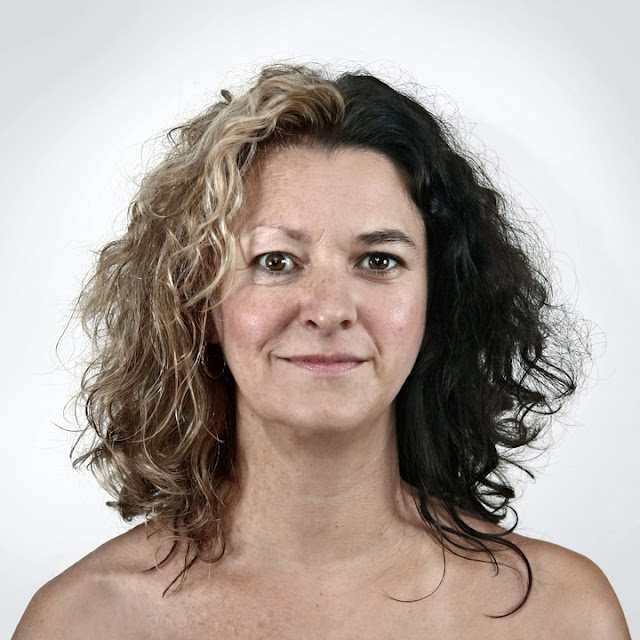 Growing up, I was told constantly that I looked just like my mom. I didn't see it. Now that I'm an adult, I can see the resemblance more easily, but I think it's even easier with side by side photographs. Ulric Collette , a photographer, took that idea to the next level by splicing the faces of family members together. It's so cool and weird - try covering half of the face and they look different again.  Here's a mother, Julie, and her daughter, Isabelle: Want to see more? Check out his website .
4 comments
Read more

- July 22, 2013
It's been one of those crazy weekends - I need sleep more than I need to write a blog post. So instead, I leave you in the good hands of these well-rested people: Yoga poses that help you sleep Removing a splinter? Try a banana. You've been offered 250k to . .  The National Scrabble Association is done . (I've heard Word Freak  is pretty good, though.) Think you know all the state capitals? Ever heard of a nudibranch ? How about a quetzal ? Okay, a mudpuppy ? Food made into everyday objects. Happy Monday!
2 comments
Read more 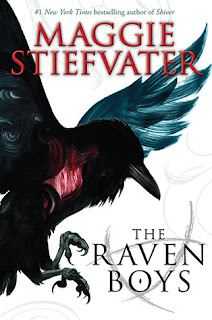 I put  The Raven Boys  on hold at my local library back in April (after I heard how much  Janssen  liked it), so I was a little surprised when I was notified it was ready for pick-up. It took so long to come in that I had forgotten I'd requested it! The main character is Blue Sargent (strange name, eh?). She's a normal teenager, living with her psychic mom and four other clairvoyant ladies (Persephone, Calla, Jimi, and Orla) in Henrietta, Virginia. They've told her for years that if she kisses her true love, he'll die.  Of course, that's not much of a problem for Blue because she's not interested in boys, especially the rich ones who attend the snobby all-boys academy in town, Aglionby. They're so awful that one even offers to pay her to sit at their table while she's waitressing one night.  (See where this is going?) But there's a twist - one night, Blue is finally able to see a spirit (of that same boy who tried to bribe her into sitting with h
2 comments
Read more 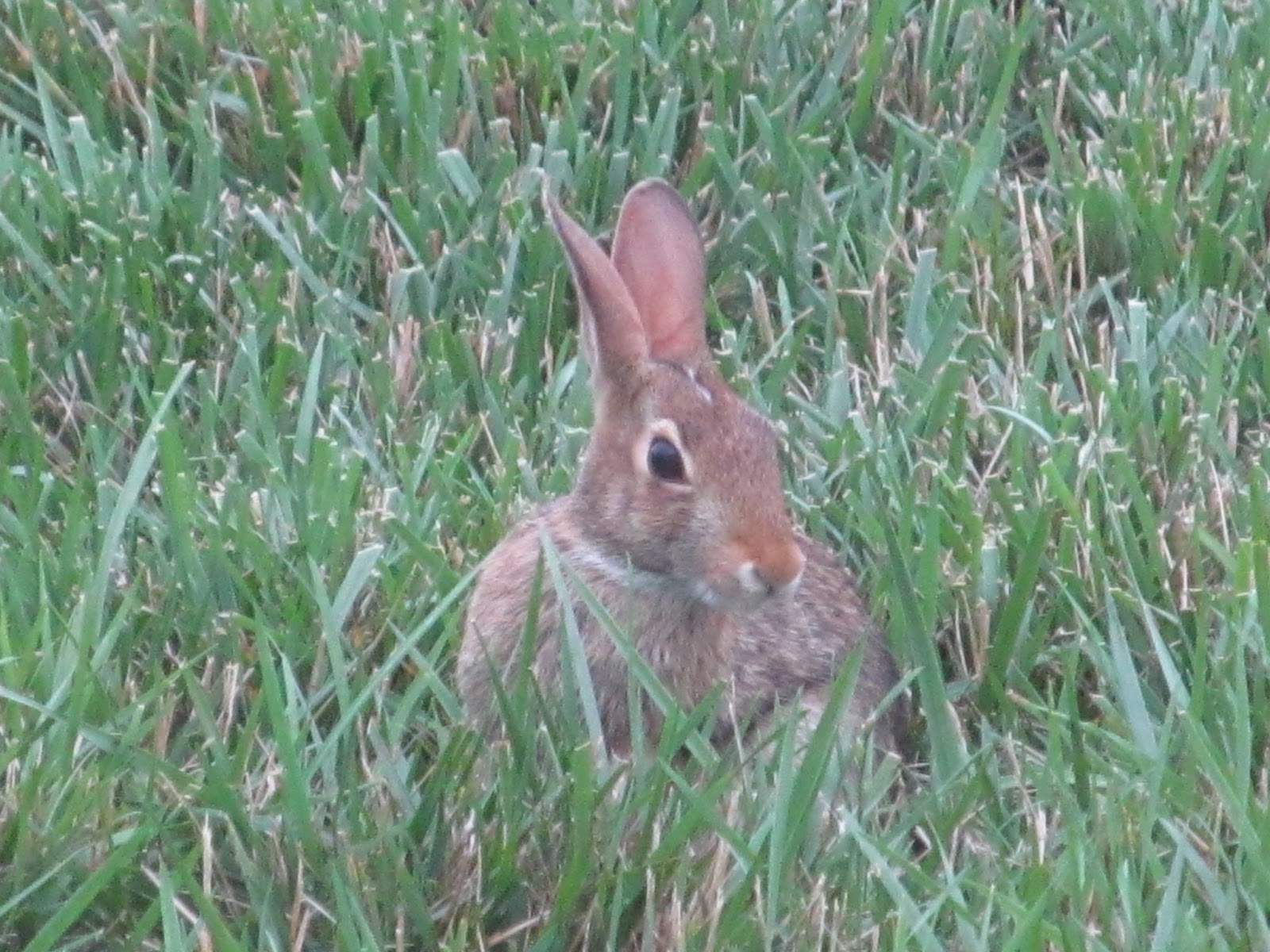 The rabbits in our area seem to be enjoying this summer. We're seeing them almost every night. linking up for wordless Wednesday
6 comments
Read more

So, Mr. Giraffe and I went to Daytona Beach for our anniversary in June. The weather was gorgeous! Sunny, blue skies, and HOT! (I was grateful for the heat because I'm too wimpy to get in the ocean otherwise.) We stayed at the Hilton (right behind the giant clock tower in the picture above). The location was perfect! It took us about 2 minutes to get from our room to the beach. And the view? Beautiful. We spent time at the beach every day. This trip was all about having fun and being lazy, not a sightseeing whirlwind. So we played chess on the hotel roof: Watched fireworks: Looked for lizards: And played four rounds of mini golf (four separate courses at three different locations). They were only two or three blocks away from the beach, but the air felt 10x thicker without that ocean breeze. Oh, and the eating. We ate so much! (This is the part where I'm supposed to show you tons of pictures of yummy things we consumed, but we took very few pictures of our
4 comments
Read more 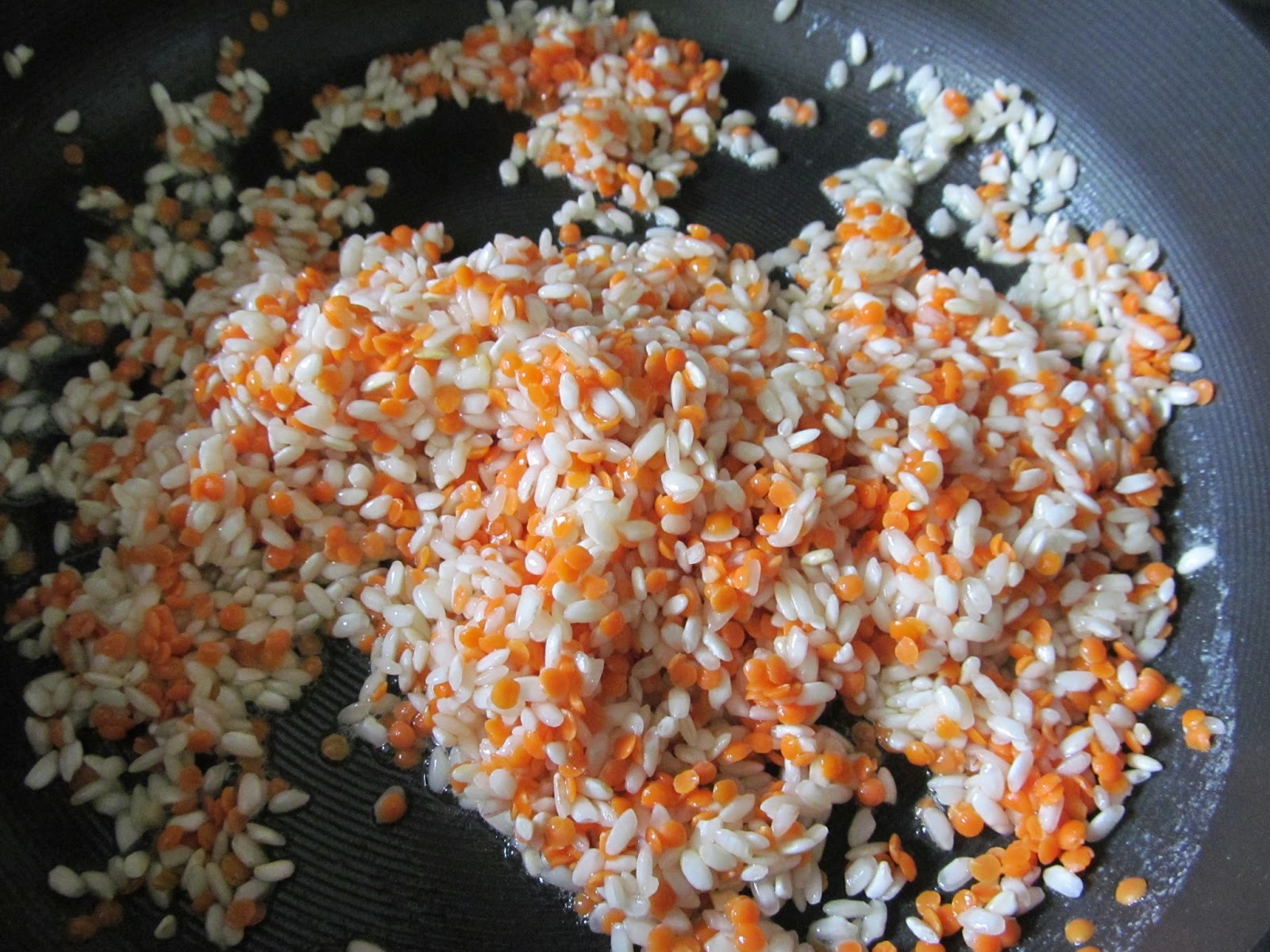 From time to time, I like to share recipes here. However, that involves cooking and eating whatever it is first. And sometimes that step doesn't go as well as I hope! I thought you'd like to hear about some of my more recent cooking failures . .  First up - Red Lentil Risotto . Sounds yummy, right? I have tons of lentils that sit in their jars and mock me during the summer months because the only time I eat lentils is in soup. They're so healthy (and a good source of protein) so I want to try to learn some new ways of preparing them. This recipe seemed like a great place to start. It started out looking so cheery in the pot: But quickly turned to a less appetizing lentil mush: It tasted . .   okay , but texture was tough to ignore . I (grudgingly) ate it, but won't be making lentil risotto again. Next up - I tried to create a healthy-ish spin on Campbell's Creamy Chicken and Noodles . I switched out the Campbell's cream of chicken for a new brand's
11 comments
Read more 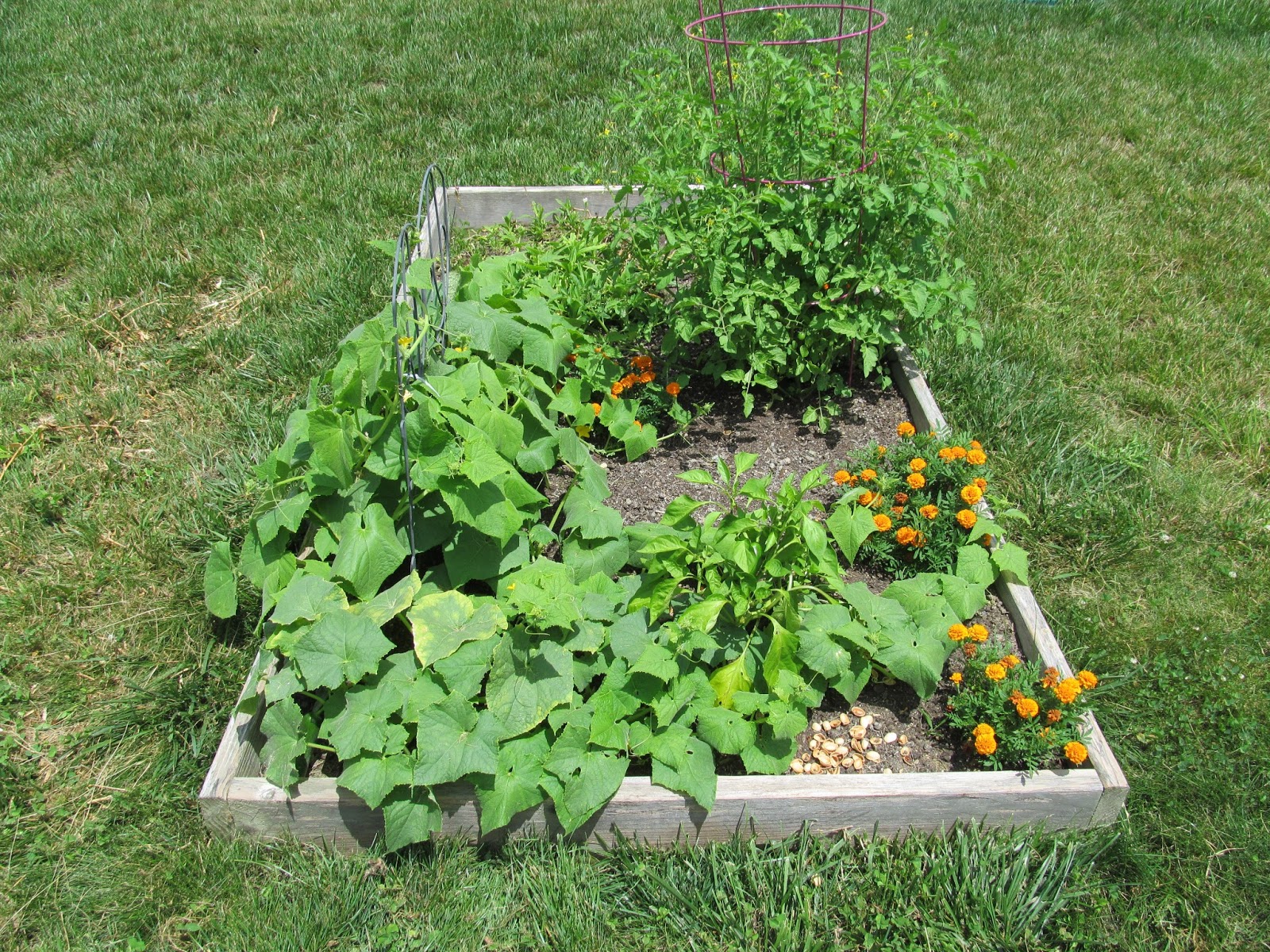 It's that time again!  Just what I like to see - lots of green!  The weather seems to have settled down. It's been hot and dry (but humid - makes no sense) for about 2 weeks straight. It's been keeping me busy with watering, but the plants are loving the sun! Everything is getting huge :) We have about 5 cucumbers growing (I say about 5 because cucumber plants are hiding experts. We've gone out in years past to find 8-inch cucumbers that we had never noticed so I don't trust my count.):  A bell pepper:  Cherry tomatoes! Our harvest total stands at 1. But I know I'll be throwing my hands up in August when we have tons:  I had my first pest visit of the year - a slug, bleh! - hopefully you'll forgive me for not taking his picture! I'll gladly transport spiders, fireflies, millipedes - but slugs gross me out. I've heard the shells from salted pistachios ward them off so we  sprinkled them around and crossed our fingers. The zinnias ar
8 comments
Read more 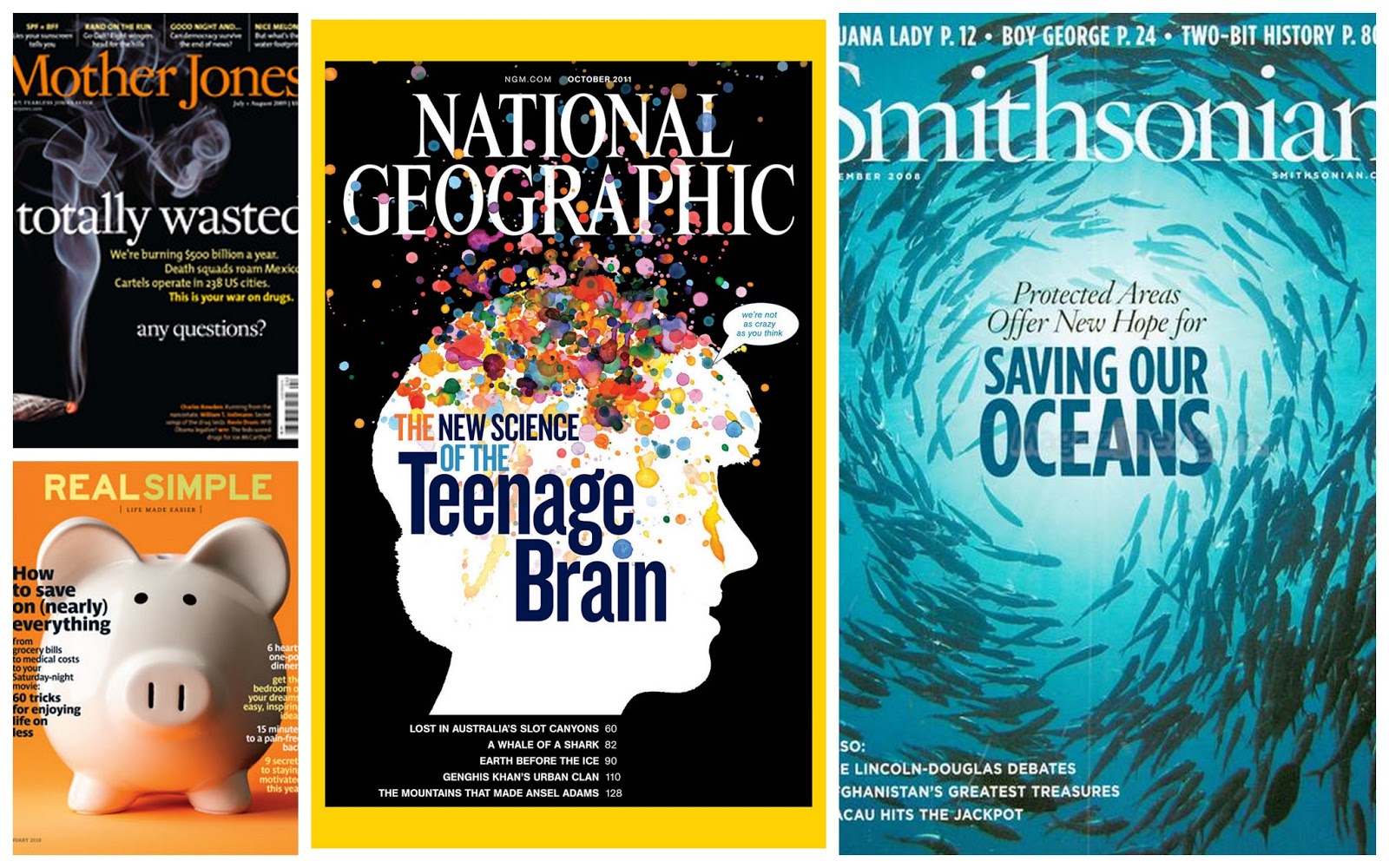 One guess what I'm writing about today. <insert Jeopardy music> Yup, magazines :) I adore magazines. They are my road trip and airplane ride reading material of choice and I'm lucky my library subscribes to probably 75 different ones.  National Geographic : I've mentioned it before , but I really do love this magazine! They write about the obvious - geography - but who knew that included the pressure population growth puts on the land, climate change, expeditions to places I've never heard of, endangered/extinct/newly discovered animal species, and on and on. In my 13 years of reading every issue cover to cover, I can count on one hand the number of articles I've skipped or couldn't finish reading. Every issue is just excellent. Mother Jones : This magazine seems to pride itself on reporting on stories that are getting very little attention from other media outlets, mixed in with popular news stories told from their point of view (definitely liber
2 comments
Read more

How much clothing do you have? 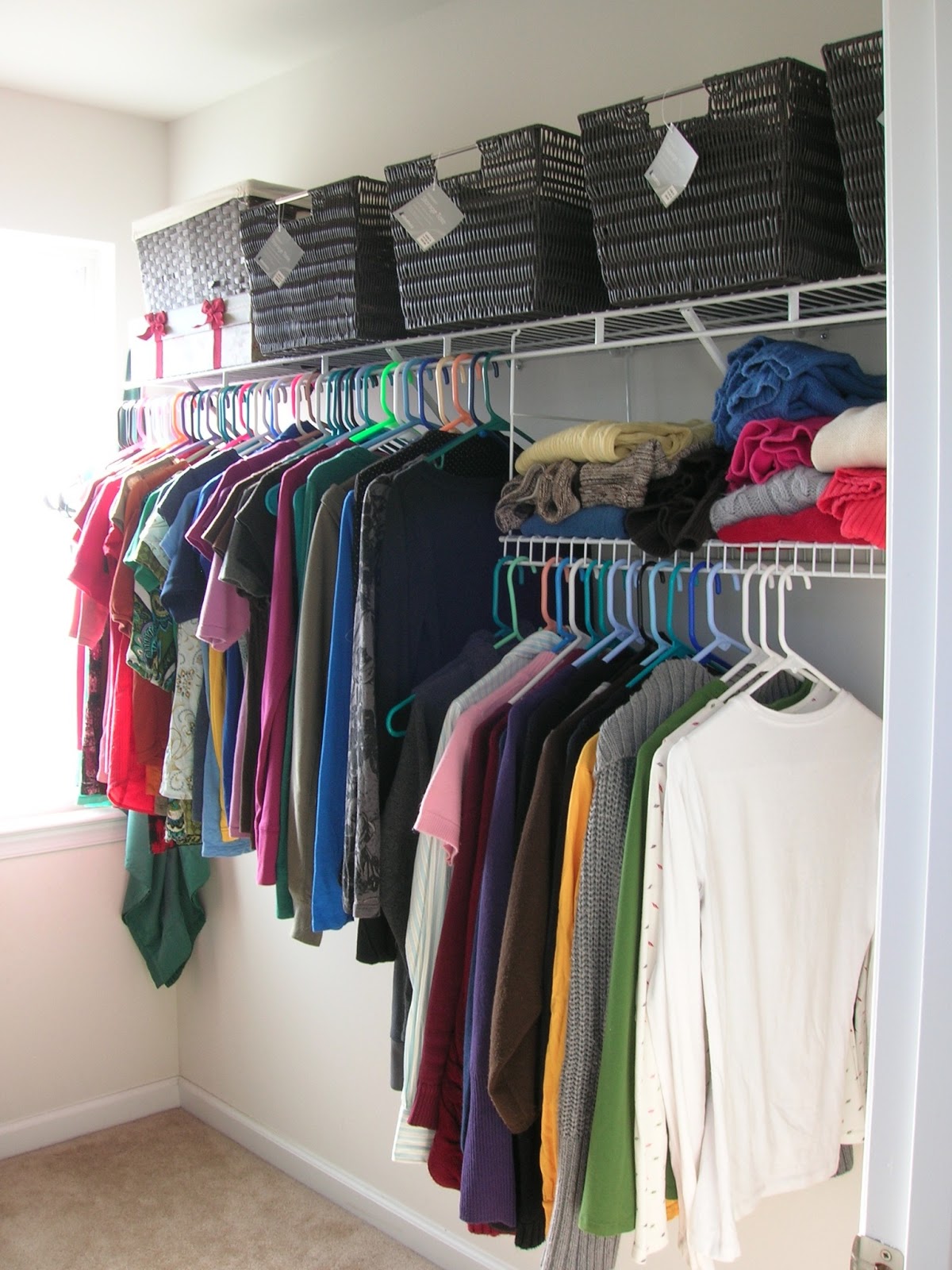 I just read a great post over at Economies of Kale . She went through all her clothing and tallied up exactly how much she has of each type (similar to this guy , but not as extreme). It has inspired me to do the same :) But first, here's some pictures of where I store my clothes. Almost all of my tops and sweaters are in this closet (the baskets up top are for sheets and out of season clothes): In the spare bedroom's closet, I hang all the clothes that are too tempting for my cats - anything with dangly bits or lace edging, and long dresses. I keep jeans, shorts, hoodies, and pajamas in my dresser drawers (my husband and I share a dresser); socks and underwear are kept in my nightstand.  On to the tallies: 73 Tops Tank tops: 9 Short sleeve shirts: 28 Long sleeve shirts: 13 (+1 jersey - I'll give you one guess as to  which team ) Sweaters: 17 (a popular Christmas gift) Hoodies: 5 34 Bottoms Jeans: 5 Capris: 2 Shorts: 5 (+1 skort that I should probably
16 comments
Read more 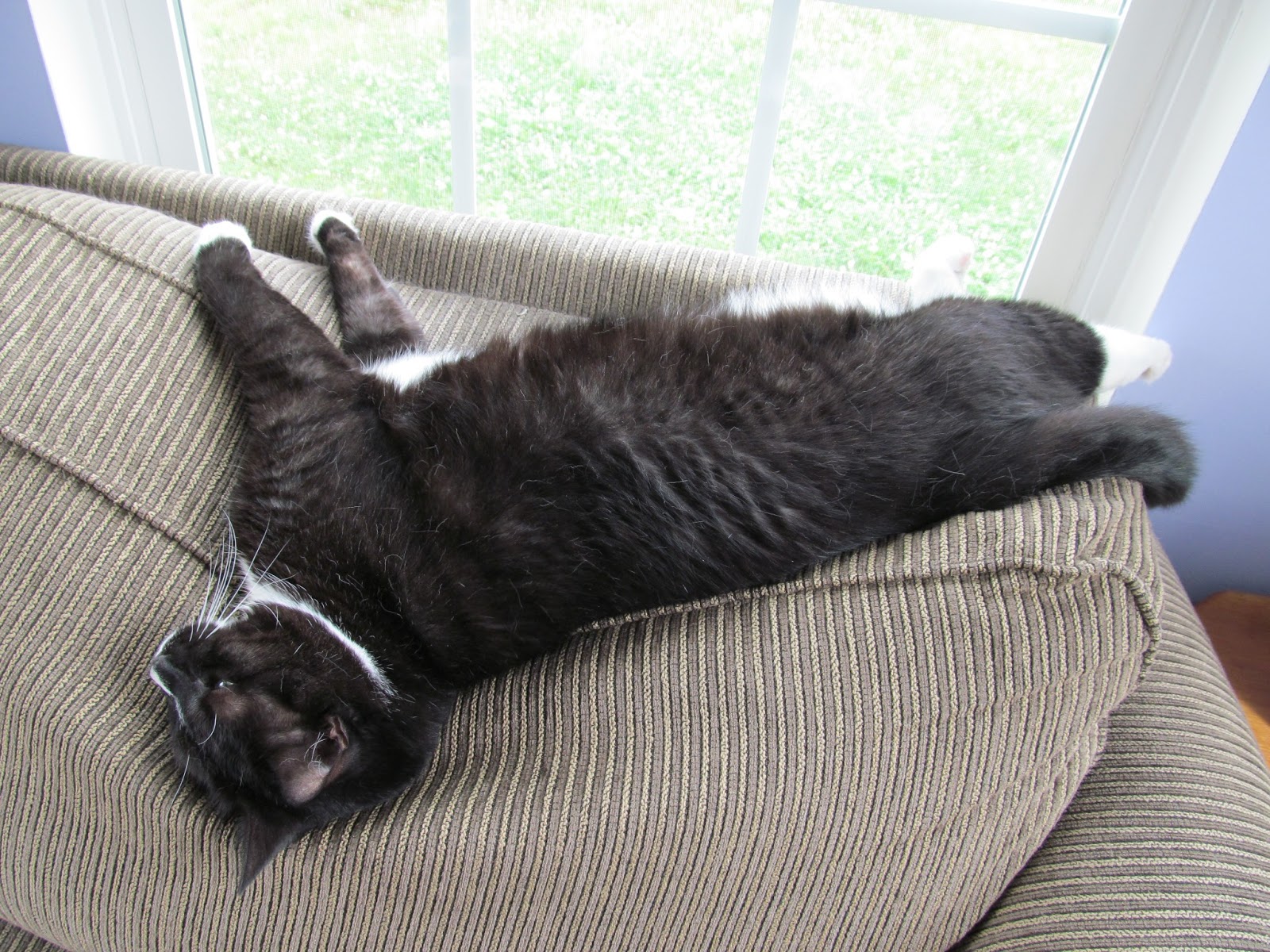 Isn't this how everyone sleeps on their couch? ;) linking up for Wordless Wednesday
4 comments
Read more 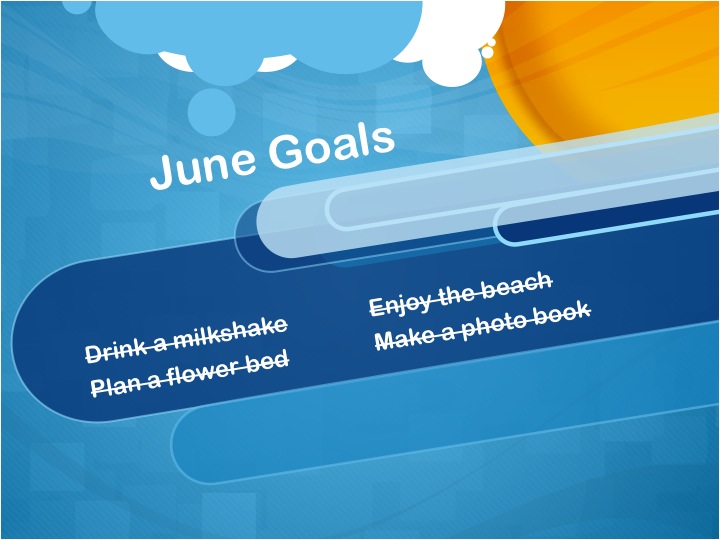 Ahh, June.  Drink a milkshake : Yup - and not just any milkshake, one made with peanut butter! Plan a flower bed : Success! There's actually a website that helps you pick plants that are suitable for your needs - a specific flower color, good for containers, soil type, native plants, etc. I'm going to wait until the fall to plant everything, but at least I have an idea of what I need to get. Enjoy the beach :  The beach and I don't always get along. So much of it gets on my nerves - the parking meter situation, constantly applying sunblock, the crowds, sand everywhere (don't I sound like a very pleasant person?). But staying at a hotel right on the beach soothed my craziness. I had zero worries about whether we had enough quarters to make it through the day. We didn't feel any pressure to stay at the beach til sunset like we do on day trips - if we were feeling bored after a few hours, we'd simply go do something else. By some stroke of luck, the beac
Post a Comment
Read more
More posts